Finally after a first cancellation and another aborted golf day, we manage to play the Eddie Lopes Trophy 2021 under a perfect weather on the NEW course.

A bit of a roller coaster for the temporary Match Secretary (JP) having to deal with 5 cancellations in the last 48 hours prior to the event. He was up modifying tee times until 11PM the night before the event!

JP’s blood pressure continued to rise during the event as he battled with the  Golf Genius software which refused to accept his hole scores and in the end the official scoring was done using the paper cards.

Ignoring the administration issues which most players were spared, the outing was Hong Kong golf at its best with a beautiful November day on a course in very good condition with immaculate greens.  Not surprisingly, the scores generally reflected the wonderful conditions.

Best guest (a battle that is often won by a score in the 20’s) was won by Greg Hagen who kindly stepped in at the last minute to replace Ian MacGovern.  Greg shot an excellent 77 gross which off his 11 handicap gave him no fewer that 40 stableford points.

The team competition went to the wire again and the team Captain Nigel Farmer was happy to share his box of Snell Balls with Mish, Roger and Will.

At the other end of the golfing spectrum, there was again a fierce contest for Keenest Golfer.  This was ultimately secured on count back by Nico Hermann who claimed that he was suffering from post-quarantine stress disorder.

Two other recent escapees from Stalag Quarantine were clearly made of sterner stuff.  Richard Castka achieved the best front nine of 21 points despite his recent broken leg from a cycle accident in Portugal.  Meanwhile Dallas Reid who had been “imprisoned” for nearly 2 years in the winelands of South Africa’s Western Cape managed to snag the low gross of 76 with is new African swing, despite a severely swollen liver.  He claimed to have consumed at least 500 bottles of wine whilst in the Cape. The new “live scoring app” allowed Stephen Ahmoye to know that he required a birdie on the last to match Dallas’ score, and he rose to the challenge with a treble bogey.

Randy Bishman coincidentally was Dallas’ quarantine neighbour for the past two weeks completing the Covid four-ball for the day.  Not surprisingly after countless tests, vaccination, and quarantine, none of them appeared to show much sign of disease.

But back to the main event.  The Eddie Lopes Trophy “was” the biggest and one of the oldest trophy of the Society.( more than 50 years old..)

Unfortunately the defending Champion came up with the story that he forgot the trophy in the taxi last time…???

Despite an intensive search  by 2000 police offices and 100 road blocks, the pure silver trophy was lost…. For info, Silver is more valuable these days than gold…. Not sure if John Harris knows that…

John was kind enough to provide a brand new replacement trophy costing more than HK$5000 (that’s what he said…) and clearly the lure of a shiny new trophy inspired some excellent golf.

Roger Best Senior with 39 points must have thought he had it  in the bag as that score would win most LSW events.  However, it turned out that the golfing Gods had decided to smile on none other than the over-worked Match Secretary who apparently rolled in putts and chips from outrageous distances all day, and with a total of 25 putts, secured the stunning total of 42 points and the shiny new trophy.  His score was (not surprisingly) a lifetime best and included three birdies.  Goes to show age is just a number and not necessarily an excuse for playing worse golf, or expecting a higher handicap.

Clearly Roger and JP are like good wine, .the older  the better (or alternatively they should be left in a dark cellar for at least 15 years). 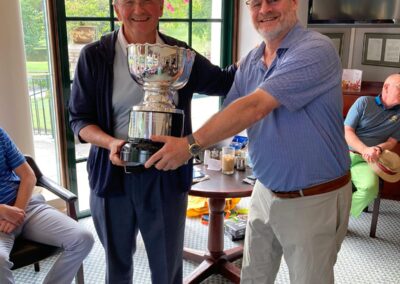 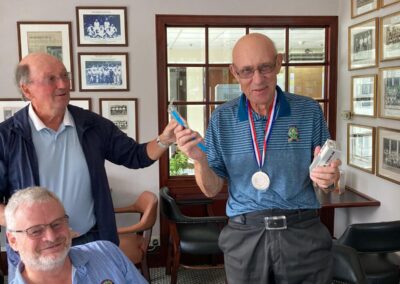 Quarantine not agreeing with some people 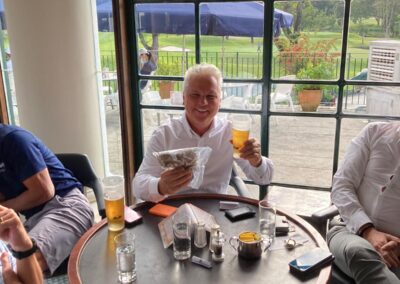 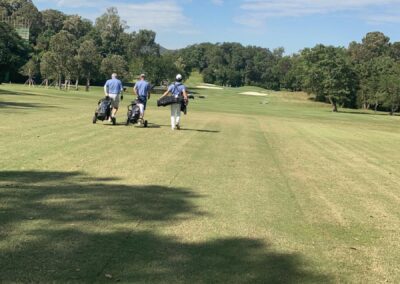 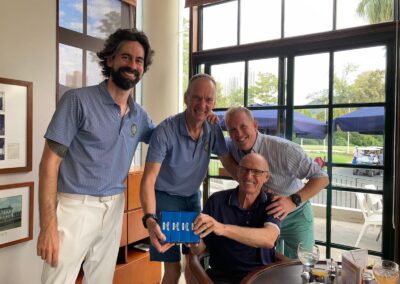 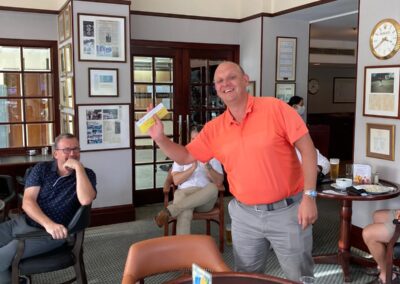