Our first Kau Sai Chau Competition of the year resulted in an excellent turnout. Was it the weather forecast, or the famed East Course? One of the last opportunities to play with Peter Boothby or to welcome back Tom McColl who had been off to a training camp in the US?

Anyhow, 24 players, 3 of them guests, were ready to rock at 9am, just to hear the thunderstorm horn blast at 9.05am. Back in the club house, we were assured that the suspension would only last one hour. So off we went to our inaugural rules quiz. 18 questions out of the intermediate level test from R&A should be easy to tackle for our seasoned golfers, or so your match sec throught. As it turned out, the best result was 14/18, with the last result coming in at 9/18. Looks as if we have some work to do here.

Back on the course at 10.05, we had Tom playing Nigel in Match Play, which Tom won 2 & 1. Despite winning longest drive, somehow, Nigel was not at his very best and in danger of competing for the keenest golfer prize. Tom on the other hand managed to win a nearest to pin and 2’s money.

Our best guest, Phillip van Dine, shot an impressive 36 stableford points, a very good result with wet course conditions. Our team event was the 3 best stableford scores on holes 8,9,10,16,18, the valleys of death. Due to an alcohol related error (ARE), your match sec had not only forgotten to delete the random scores to test the leaderboard but had also forgotten to actually test the leaderboard and as such had not realized that the setup made for this comp in GolfGenius was wrong. Prizes were hence awarded to the team scoring best over 18 holes (Darin, Roger, Ian, YB) instead of the team actually winning this competition, JP, Martin, Peter & Mark. Dave Collins has been asked to make an accrual for a box of golf balls to be handed to the real winners at our next event.

Once again proving that god punishes small sins swiftly, Lorenz was awarded the keenest golfer prize with an impressive 20 stableford points, 3 points behind the runner up for this prize. A lovely lady’s watch, golf balls made of titanium and a valuable car gadget are now his.

On the other end of the table, we saw one of our newer members clinching the shot of the day prize. Jonny Brock kindly volunteered to present the tight competition for this prize:

In keeping with the Olympics, we had three medal contenders for Shot of the Day:

The Bronze medal went to Lorenz, after spending the previous hour warming us all up with a rules quiz during the t-storm delay, but unfortunately forgetting to warm himself up as he ‘launched’ his drive off the 1st, with a kiss on the top of the ball, which duly toppled off the tee, down the slope and just across the cart path into the thick rough. Had it been Matchplay, his opponent would no doubt have looked for it, but in the spirit of teamwork we drove to the drop zone some 270 yards away, to match the rest of his partners. However, the flight behind had less sympathy, and Martin ran down to ‘help’ his compatriot and found his ball. However, it was deemed beyond the 3 minutes, despite his yells down the valley of the opening hole, we couldn’t hear him! (Apparently Martin then played the next 18 holes with that same ball, before flying it over the 18th green, to lose it close to wear Lorenz had lost it 5 hours earlier)

Silver medal went to Felix, our guest and soon to be newest member who was playing a nip & tuck, tight, 4-ball match with Will against Wes & Shane. On the 16th, with their match all square, Wes declared the hole won, only for Felix to say “Not, if I chip in”, which he then proceeded to do. He then repeated the feat on the 18th to seal victory. The committee is currently processing his membership at record pace so he can represent LSW against HKFC next Monday!

The Gold, however, went to a 13 handicapper, who had just completed the front 9 in level par, declaring his score ‘reasonable’ as he blasted another drive down 10, leaving only 215 to the pin. Whilst debating whether to use his 4 iron or hybrid, Lorenz discovered that he’d yet lost another ball and had to head back to the DZ. During the delay, our gold medalist to be chose to lay up instead, proceeding to lob his wedge just too far and topple into the valley. A few moment later he then topped his 9 iron into the same valley, although, as it was a ‘genuine’, if rather feeble, attempt to carry the same valley, he was allowed to use the 2nd DZ, from where he wedged onto the green and sank his putt for a DB. He didn’t let it shake his confidence though and finished the round 6 over to claim 39 points and the Slazenger Trophy, whilst his cart partner also carried on as he’d started to claim the keenest golfer prize, perhaps the only time in the society’s history that first and last spot were secured in the same cart?

Congratulations on all fronts to George, our Shot of the Day Gold medalist.

At the top of the leaderboard we were happy to see YB win lowest gross. Super to have you back, YB. Brad took the runner up prize and as already mentioned above, George won The Slazenger Cup with an impressive 39 points. Worthy winners after a long day.

Our next competition will be held on the Eden Course for the first and only time this year, where we will be playing for the Eddie Lopes Trophy from the Blue Tees on August 9th.

Not only are some of us also playing against or for the Football Club on that day, it will be the last chance to see Peter Boothby and Noel Prentice in action for a while, who are both moving abroad. We only have a few spots left so do sign up quickly.

See you all on August 9th. Lorenz 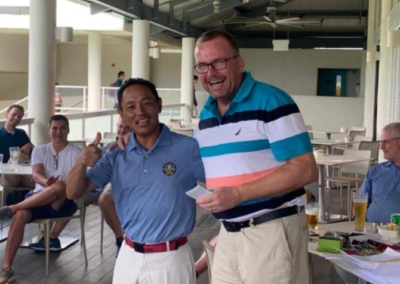 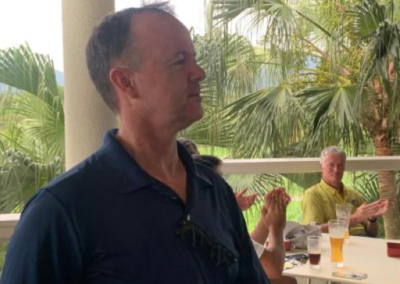 Brad Jacques heading for his prize 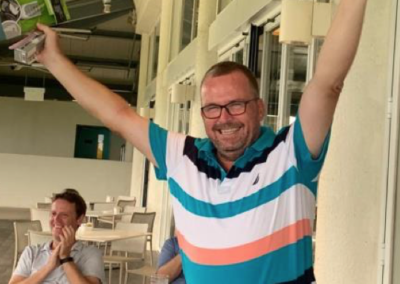 A prize is a prize 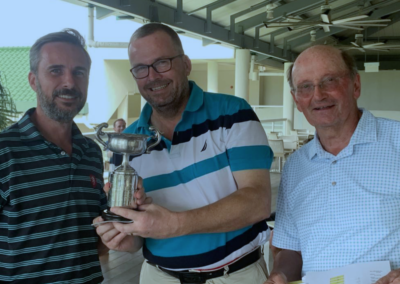 George our Gold Medal winner with JP and his new shirt